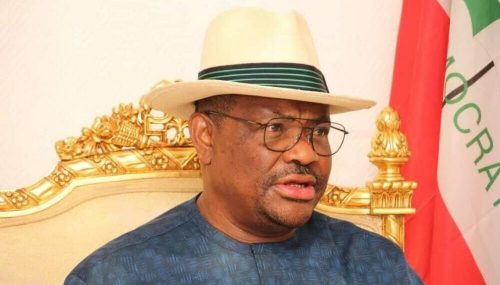 However, a source who spoke to the Daily Post on the condition of anonymity said the rumours were false and that all PDP flags remained untouched within the Government House.

Due to his feud with Atiku Abubakar, there has been speculation that the Rivers Governor would defect to the All Progressives Congress.
A former PDP National Chairman, Abubakar Baraje, has said that Wike is an important member of the party.
Baraje said this while reacting to the rift between Atiku and Wike over the choice of Governor Ifeanyi Okowa of Delta State as the party’s presidential running mate.
It was recalls that Wike had earlier invited Lagos state governor, Babajide Sanwo-Olu and other APC Chieftains considered to be Bola Tinubu’s men while commissioning a flyover in Port Harcourt.

Some Nigerians have alleged that Wike might be dumping the opposition soon for the ruling party due to the invitation.

However, Baraje while speaking with Arise News, said that was not the case.

He said: “One of the resolutions of PDP’s BoT was for Atiku to meet with Wike, and they have met; another meeting may come up.

“Until Wike declares that he is no longer a member of PDP, as far as PDP is concerned, he is not just an ordinary member but a leader of our party, a governor of our party.

“We are still meeting with Wike, and we believe that soon all the hullabaloo will be over.”