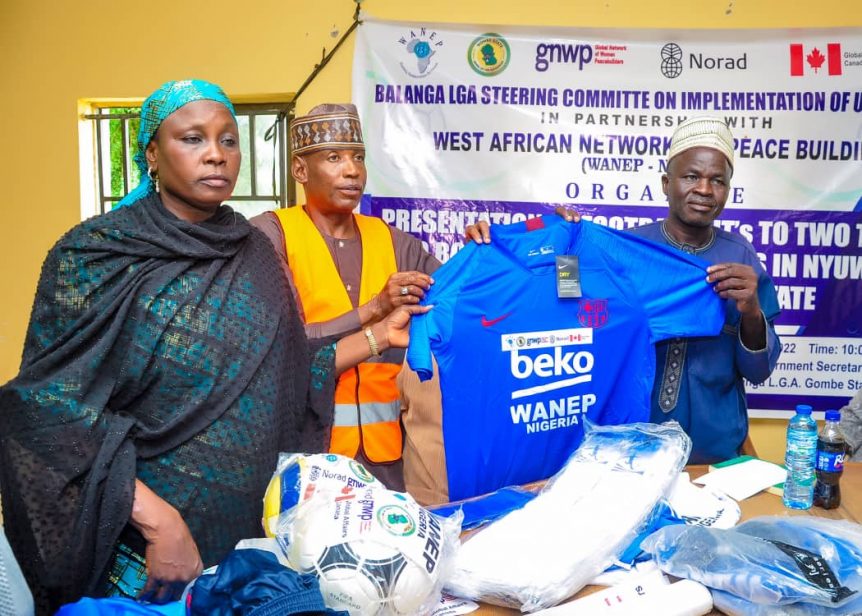 The initiative aims to promote peaceful coexistence among the state’s Lunguda and Waja tribes.

Two sets of 16 Jerseys, two sets of football socks, two balls, two sets of captain bands and whistles, four sets of training bibs for regular training of each team, and two sets of Goal Keeper Jerseys were donated.
Mr. Mohammed Farouk, representative of the WANEP National Network Coordinator, Mrs. Bridget Osakwe said the choice of football wears was borne out of the proposals made by the youths and women from the Nyuwar community during the various peace dialogues held.

He said “the participants recommended the introduction and provision of sporting facilities for activities between them so that the long-standing bond of unity and peace would be resuscitated and strengthened, stopping in its track the hostilities that have in recent times threatened centuries of relations between them.”

Farouk said each of the two clubs, “Wonders Sparrows” and “Gilengitu FC” of Nyuwar, were a mixture of players from both tribes, to strengthen their relations.

He said WANEP was using an all-inclusive approach so as to carry everyone along.

Receiving the items from the representative of WANEP, in Talase, the Chairman of Balanga Local Government Area, Mr. Garba Umar, represented by the Chief Administration Officer, Mr. Adamu Yerima, thanked WANEP for the gestures.
He commended the move as a very good step in bringing peace and development to the people in Nyuwar and Balanga Local Government Area as a whole.

Me Umar said; “With this thing, it will unite us the more. The two teams, you know, when a footballer wears a uniform, it gives him a new spirit, and the spirit will make him unite with others.”

The Gombe State Emergency Management Agency, represented by the Director and Head, Rescue and Rehabilitation, Mr. Mohammed Garba, said the gesture by WANEP had made his organisation the happiest because, with the unity and peace in Nyuwar, Gombe SEMA would have fewer burdens in its hands.

“As part of our efforts in ensuring that peace prevails, we are in constant collaboration with organisations like WANEP to ensure that we send the message of peace to local communities where there used to be violence from time to time. So, it is the continuation of this that today, we are giving these football jerseys and footballs to these two clubs from Nyuwar,”Mr. Graba explained.

He is delighted that sports were being used to quail the recent recurring crisis between the Lunguda and Waja tribes in Nyuwar because sporting activities are global facts that generate peace everywhere in the world.

Me Garba said;“Problems are forgotten and friendship is built as a result of the sporting activities being conducted. It will go a long way to strengthen the friendship, especially when it is handled properly.”

Sports Officer of Balanga Local Government Area, Mr. Abubakar Magaji thanked WANEP for the gesture, saying “he is delighted that Waja and Lunguda will now come back to being one like they were in time past.”

Some of the players expressed their gratitude to WANEP for accepting and responding to their request for peace in the area.

One of them, Nasiru Ardo expressed his gratitude and promised that because the items are meant to unite the two tribes, no stories of crisis would be heard from their end, because they were already united now.

Also Suleiman Ayuba said there would be no more fighting in Nyuwar now; they would now be playing five times a week in the community.

He however called on well-meaning sons and daughters of Nyuwar and Balanga to step in and provide such facilities for the needed peace to reign in the area, saying outsiders should not be ones always coming to provide peace and unity for them when from within that can be done.

Recalled that the Lunguda and Waja Tribes in Nyuwar, who had lived together as one for over two centuries, have in recent times engaged in attacks and counter-attacks, but came out strongly to condemn it and vowed to recover their lost unity and peace.

WANEP, which has also been at the forefront to ensure restored peace, had intervened severally to help them get back together.

It is hoped that other stakeholders will step in to lend their voices.