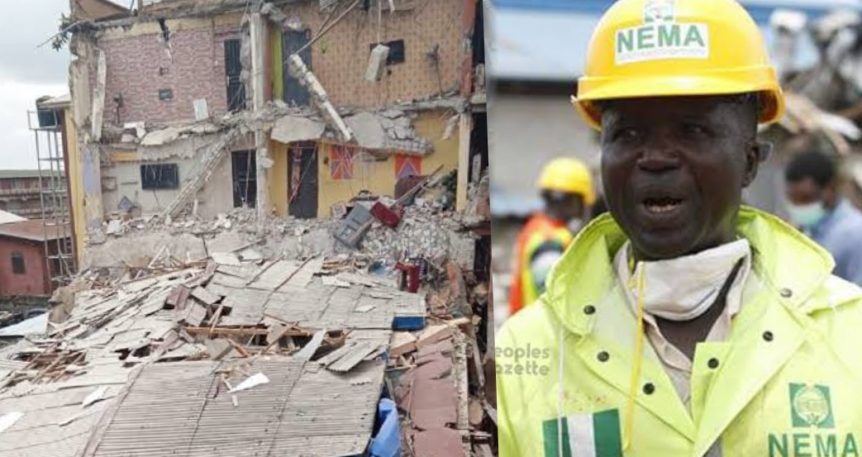 The National Emergency Management Agency said on Friday that four people were killed and one was rescued when a building collapsed on Oye Sonuga Street, Palm Avenue, in Mushin, Lagos.

According to the News Agency of Nigeria, Mr Ibrahim Farinloye, the NEMA South-West Zonal Coordinator, spoke during a phone interview. He stated that two males and two females died in the building collapse, while one person was rescued.

The Lagos State Government had previously stated that it would investigate the cause of the collapse. Mr Omotayo Bamgbose-Martins, Commissioner for Physical Planning and Urban Development, made the disclosure in a statement obtained by NAN.

During a visit to the scene of the three-storey building, which was said to be about 40 years old, he directed that it should be pulled down immediately for safety reasons and to forestall further collapse. He directed the Lagos State Building Control Agency and the Lagos State Materials Testing Laboratory to unravel the cause of the collapse.
Residents of the collapsed building also attempted to save their belongings after its remaining parts were demolished.

It was also observed that the collapsed building affected some parts of the adjoining building.

A few of the residents, who spoke to one of our correspondents, stated that the building had shown distress signs.

“Yes, the house was weak,” said Baba Wale, an occupant of the building. I live in the demolished building. I was able to escape unharmed.”

Another resident, who requested anonymity, stated that he returned home quickly after receiving a call about the incident in order to save some of his property.

“The first building collapsed, and it affected the other three-story building beside it,” said Daddy Tola, a middle-aged man in the adjoining building. A house will sometimes give warning signs before collapsing. We’re all trying to get our belongings out because we’ve been told it’ll be demolished.”
Mr Oyeniran Ayo, an eyewitness, stated that he heard the collapse while walking down the street.

This year, ten buildings have collapsed in Lagos State.

On September 4, a seven-story building under construction on Victoria Island’s Oba Idowu Street collapsed, killing two people. In the last two years, 18 building collapses in the state have killed 84 people. According to the Brookings Institution, a non-profit organisation based in the United States, Lagos had 167 reported cases of building collapse between 2000 and 2021.